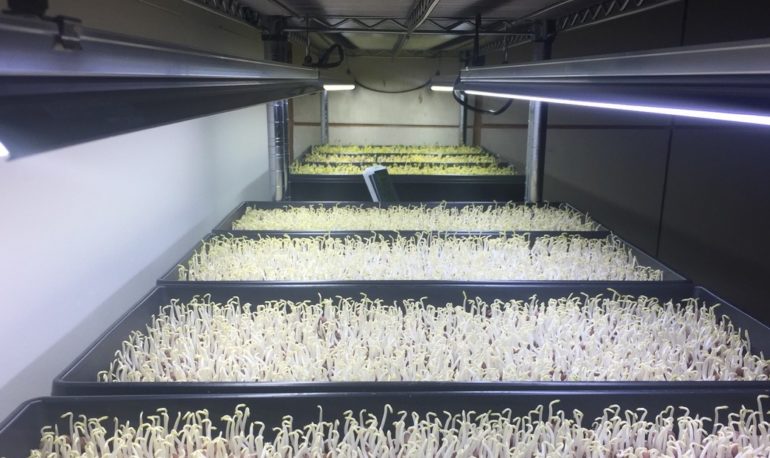 Gives Back to our Community 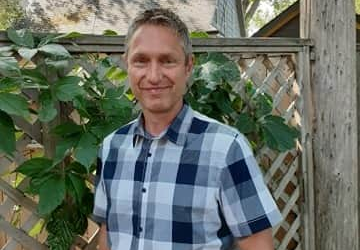 “I am a people person,” Richard Jelsma says, late in an interview so congenial that it felt like a visit between friends. Richard’s story is a remarkable one: It crosses several continents, involves a career in applied horticulture; a deeply committed marriage to his wife of 24 years, Jocelyn; the growth and welfare of their four children; two international development missions, served in the Philippines and Rwanda; and now, his commitment as an entrepreneur to a microgreen growing company, Grassland Greens. And this is not an exhaustive list!

He speaks happily of his desire to see all of these relationships grow and flourish—to leave the world better off than it was before he entered it.

Born in Drachten in the North West Netherlands in 1971 to a family with agricultural roots, Richard first learned Frisian, an ancient (dying) language belonging to roughly 500,000 people of the region; then Dutch; and then, in high school, some English. Although Richard knew he wanted to study and work in agriculture, the dairy farming undertaken by some of his aunts and uncles was financially difficult. So he focused in the final two years of high school on agriculture.

Following that, he studied for two years at Horticultural College Frederiksoord and worked for a further two years at a greenhouse production facility in his homeland, before moving to British Columbia in 1993, on a young farmers’ exchange program. Richard had qualified for a one-year work visa to get there. He is one of a high percentage of Dutch horticultural experts who are world leaders in greenhouse technologies and who often apply their skills abroad.

Richard recalls happily extending his visa for a second year, and subsequently qualifying for Landed Immigrant status: After that he met his future wife, Jocelyn Walmsley, then a dental assistant, in B.C., through a local church’s “College and Careers” group. They were married in 1996.

A Brief History of Development Work

While living in Surrey, B.C. in 2005, the couple decided and trained to work as non-denominational mission workers. Richard took a course in Community Public Health to prepare him for the work and Jocelyn trained as a midwife.

They then spent one year in the Philippines, serving alongside Filipinos, because they wanted to work in a Third World country to assist the less fortunate. This wish was grounded in Christian theology that Richard quotes: “Just as you did it to one of the least of these who are members of my family, you did it to me” (Matthew 25:40). Put simply: All people are important, no matter their economic status.

While in the Philippines, Richard and Jocelyn were approached by another church to serve in Rwanda. The next nearly 10 years were spent there (2008-2018), with Richard as project manager. The latter he defines as work he did “dealing with people of different cultures, different languages and levels of education, building relationships with locals, working and empowering the less fortunate, but also rubbing shoulders with government agencies, city officials, and [completing] administrative papers.”

In the Rwandan community where they lived, Richard and Jocelyn did a needs-based assessment to determine how they could work alongside the community, to address some of its needs, as part of a lower economic zone. The work, he says, “morphed into creating a pre-natal and post-partum program.” Jocelyn and their team taught Rwandan women basic health holistically, and by caring for them during pre- and post-natal phases. Richard oversaw the building of a 10,000 square foot, 22-bed birthing facility, to provide complete, high quality care for mothers and their babies. In the last year and a half of that work, Jocelyn and their team supervised the hiring of eight Rwandan midwives, as well as nurses, lab technicians, and an all-Rwandan, clinical board of managers. By the time the Jelsmas and their team had accomplished this, Richard says, “We worked ourselves out of jobs!”

One of the highlights for Richard was developing a five-hectare, pineapple plantation that generated income for Rwandan women living with HIV, a project he undertook in partnership with “United Nations Women.”

Reflecting on his life, he says with quiet conviction that “my diverse background, having lived cross-culturally and all of life’s experiences have shaped me [into] who I am today.”

While maintaining a temporary family home in Saskatoon’s Nutana area, Richard has recently researched and inspected houses, to find a permanent co-working and living space in the city, for him and his family.

His wife, Jocelyn, is now a successfully employed and very busy midwife with the Saskatoon Health Region, whose work has unpredictable and demanding hours, 24/7. So Richard has sought the flexible schedule that self-employment offers, so that he can raise and support their children and maintain their home.

Growing microgreens allows him to choose the hours he works—intermittently, during the day and at night, when his family’s needs are cared for. 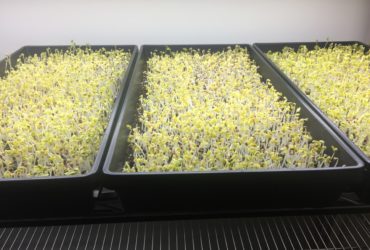 Richard readily identifies himself as a “passion-based” entrepreneur, with many years of significant training and experience in horticulture. But he also identifies with being an  “opportunity-based” entrepreneur, since raising microgreens is a “doable,” and potentially profitable, task: The crops have a life cycle “from seed to harvest” of between 9 and 14 days, and they are fully organic. Richard’s target breeds of peas, sunflower, radish, kale, purple kohlrabi, brassica mix and a few others are highly nutritious, can be versatile for meal preparation and have sold well in preliminary trials. Richard plans to grow these crops to fill client orders, so that there will be little waste. While profit is necessary, he also describes the ecological principles behind his business idea:

“I came to the [microgreen] idea after moving to Saskatoon from 10 years in Rwanda. Changing from a warm climate, where you can grow crops year-round, to a cold climate, where for a big part of the year crops are mostly imported, was really challenging to me. It made me look at what can be done locally. Producing locally not only benefits the local economy and job market, but also reduces [our] carbon footprint and food waste. As health is moving more to the forefront of people’s minds and [as] nutritious microgreens are not yet a very common commodity, I see much market potential here.”

To reach this stage of development in his business, Richard knows it was more than chance that brought him to enroll in Praxis’ startSMART program.

After relocating to Saskatoon in 2018, he worked for six months in the City of Saskatoon Parks and Recreation Division (a maternity leave appointment that ended when the employee returned). Then, Richard found himself temporarily (and restlessly) on Employment Insurance, “for the first time in my life.”

He met a career counsellor at the CanSask Employment Centre who, when he heard that Richard had wanted for years to run his own horticultural business, directed him to the Praxis School of Entrepreneurship. Richard enrolled through the “Self-Employment Program” in startSMART, starting in January 2020.

In the program, Richard “appreciated a lot” Monica Kreuger’s facilitation on entrepreneurship and found Deanna Litz’s leadership and coaching “very positive and encouraging.”

But when his cohort of students were still in the critical, first phase of the program, Covid-19 struck. The Praxis team immediately rallied to support Richard and his peers, who were trying to prepare their business plans. Timely support addressed the cohort’s financials, market strategy and surveys, risk management and other crucial modules. With the help of Brent Kreuger, all modules were quickly moved online, via Zoom.

Now in phase two of the program, Richard observes that the vision and planning he accomplished in those first challenging months have made the time commitment worthwhile: He says “It [was] my first time starting my own business,” without prior experience. “I wanted to get a good foundation for that purpose . . . The program helps to think through all aspects of starting and running a business. I appreciated the ongoing support [of coaching], which is unique.”

He was most interested in and impressed by the program’s marketing survey, sent to his potential clients, contacts, friends and family, over SurveyMonkey. The survey illuminated a gap between current levels of satisfaction with the fledgling, local microgreen market and the importance respondents place on buying year-round local and organic microgreens. Richard has stayed in touch with his respondents and intends to use similarly targeted surveys in the future, to measure customer interest, demand and values.

The questionnaire also revealed the importance customers place on receiving produce in biodegradable packaging. Richard has responded by purchasing that packaging, despite its high cost, to reflect his environmental conscience and to meet his customers’ expectations.

This quality of “relationship marketing” with one’s customers, as taught by Praxis, has become second nature to Richard: His “people person” character has earned him a following of neighbours, contacts, friends and extended family, who have already purchased trial crops and who will soon become his regular customers. His business name reflects local influence, where “grassland” refers to the region of Saskatchewan and “greens” refer to his specialized, microgreen crops.

Having lived for two years in Saskatoon, through two harsh Prairie winters, Richard still asserts that he and his family are committed to staying here: Grandparents, aunts and uncles and cousins are “the reason we moved to Saskatoon.” Those family connections will keep them here.

Richard’s training at Praxis has eased the transition to Prairie life. Even amid the crisis times of Covid-19, he says he would definitely encourage others to take startSMART: “I would recommend this program to anyone who is starting his or her own business. Especially to those who don’t have any formal business schooling background. This program is great to start your business with the supportive environment of the Praxis staff.”

He observes that he has never seen anywhere else Praxis’ hands-on model of “an entrepreneur teaching another entrepreneur.” Furthermore, the program’s focus on in-class experience and practice, instead of on book-based theory, contributes to startSMART’s usefulness. Richard says: “I learn with doing and seeing, so [the program] has worked well for me.”

A Future of Family and Entrepreneurial Relationships

In leisure hours, Richard is an “avid runner, fisher and gardener,” making the most of Saskatchewan’s few months of “good weather.” In non-Covid times, he also plays Ball Hockey and while TV is not on the agenda, he roots for his family’s first hometown team, the Vancouver Canucks.

Moving shortly into a house that will provide both living space and a growing space for his microgreens, Richard keenly anticipates the near future: Grassland Greens will bring with it the rewards of earning a living by his crops.

By enabling him to support his family, by applying the horticultural expertise of The Netherlands to Saskatoon, and by allowing him to sell quality, organic produce to customers whom he knows, Richard will continue to grow by relationships.

His life purpose has been all about “giving back” to others, partnering with his wife, Jocelyn, and raising their children to contribute to a family-wide approach to life as a mission, over many years.

To leave the world better off than before he entered it, this self-professed “people person” is poised again to give back to his new home—this community, where he lives and serves. 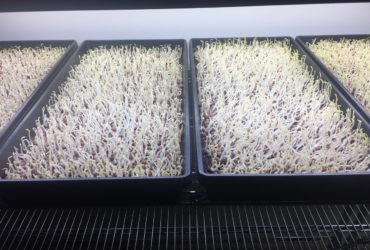